Covid-19: it' s bad for health systems and tough for individuals, although not for the same reason....

Covid-19: it' s bad for health systems and tough for individuals, although not for the same reason.... 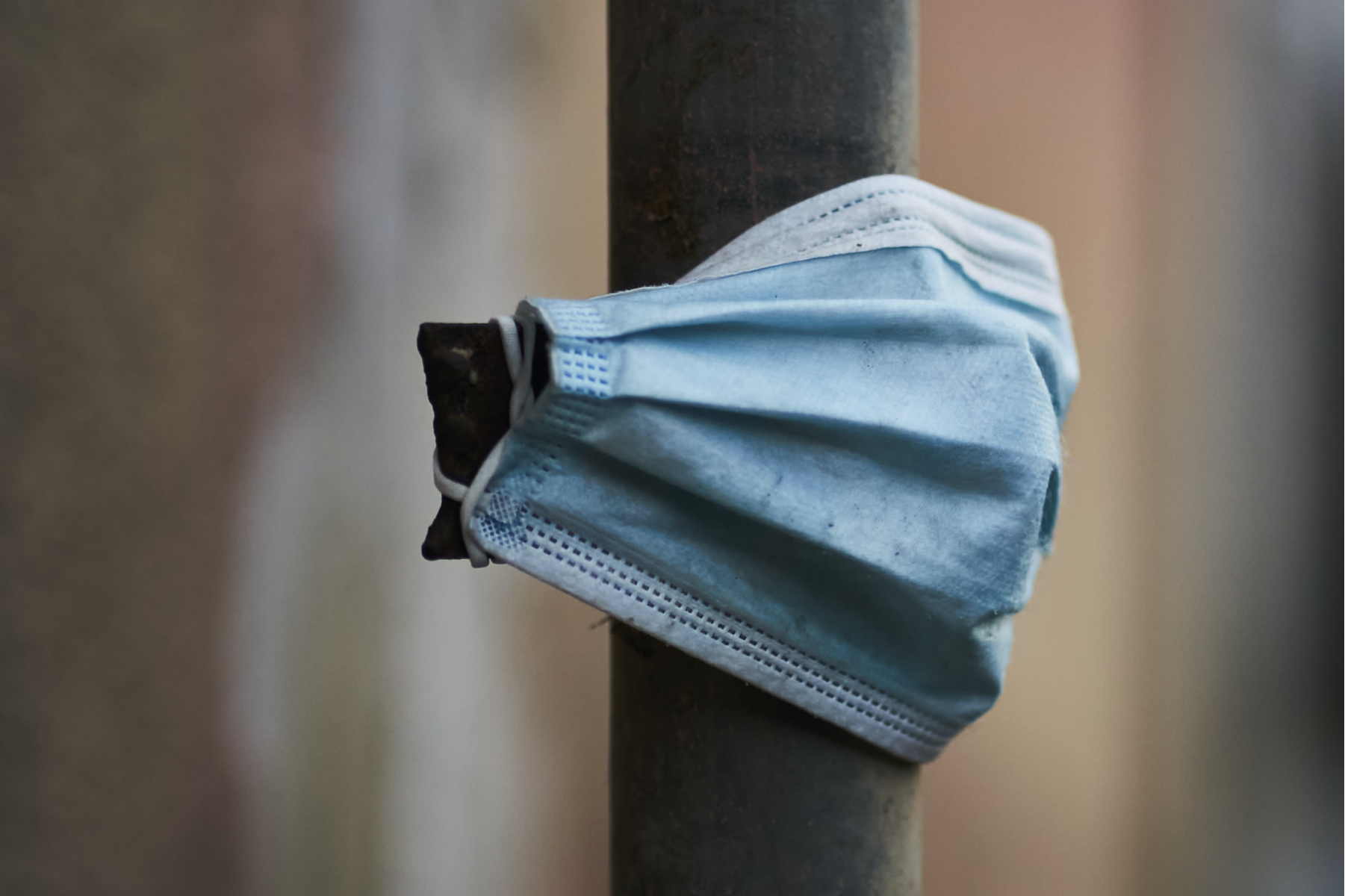 A big part of good quality analysis is looking at the world objectively, and we try to do that at Melio, in part, by taking numbers and looking at them in different ways to see if they hold patterns we can use to understand the world.

We were having a Zoom chat about how annoying it was to get force-fed death statistics for Covid-19 for different countries without any data about how big the populations of those countries were or what a typical year looked like. Frankly, we found it challenging to decide what we should worry about and what was just politics and news creation. We thought we’d look at some UK statistics to see if they could help and check if it’s possible to get data to understand things better.

This post is not about what any particular country should or should not have done when faced with it. It is to help you understand some of the more confusing stuff like, “Why is it that the health system’s struggling, but I don’t know anyone who’s been seriously ill?” More importantly, it’s to show you that anyone can start to investigate the data themselves.

What do the data say?

The UK is pretty good when it comes to open data. In particular, we have the rather excellent Office for National Statistics (ONS), which publishes all sorts of data that you can use as a member of the public to keep yourself informed. One of the datasets is a weekly summary of death statistics for England and Wales. This dataset does include a Covid-19 section now. Still, we chose to ignore that because death certification is not perfect and recording of Covid-19 is likely to increase as awareness increases. Instead, we looked at all-cause death.

These data are rather exciting. We think they provide an essential reference source because current media sources are fixated with absolute death rates, which fail to account for base rates. Here are weekly death rates going back to 2010, with 2019 and 2020 highlighted. Note that the weeks are numbered 1-52, and the data for 2020 only go up to 10th April (week 15). The UK lockdown started in week 13. 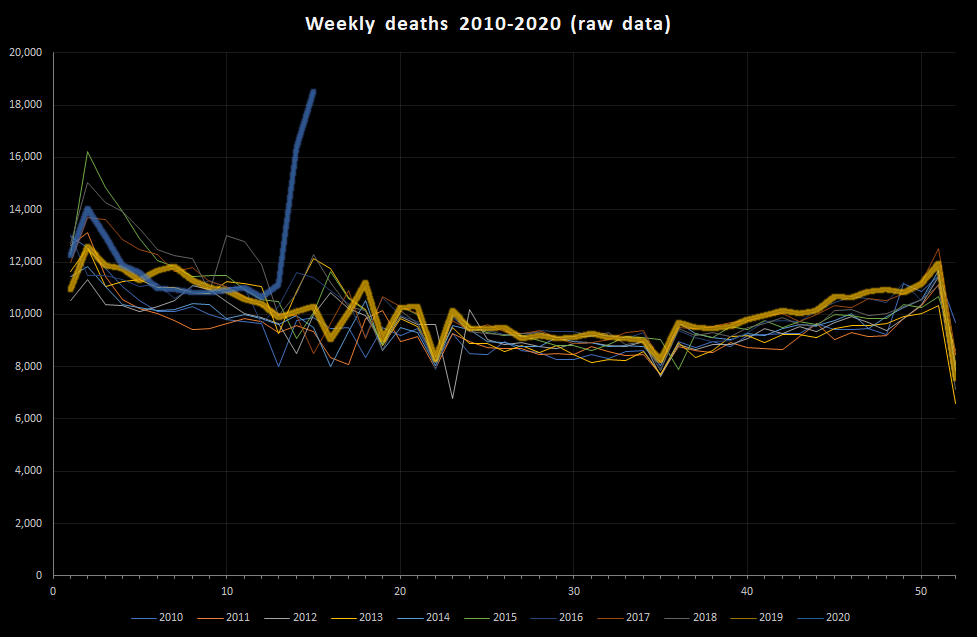 As you can see, there is a clear excess of deaths this year, but it is only apparent from approximately week 13-14 (the data only go as far as week 15 – the week ended 10th April). Indeed, only around 3rd April, the number of deaths has started to exceed the awful (but not very rare) winter flu peak seen in 2015. It’s also quite common to get lumps of deaths in the first half of the year. It’s important to note that there is a lag between these data and actual increases in deaths, probably a lag of a month or so between the increased morbidity (i.e., illness) and the increase in mortality.

That’s quite a messy graph, so let’s do some stats. First, we calculate mean deaths per week for each of the 52 weeks between 2010 and 2018. This gives us a reference level. We can also look at how much that varies over the years, giving a sort of ‘normal’ year. Then we can plot the 2019 and 2020 data against that: 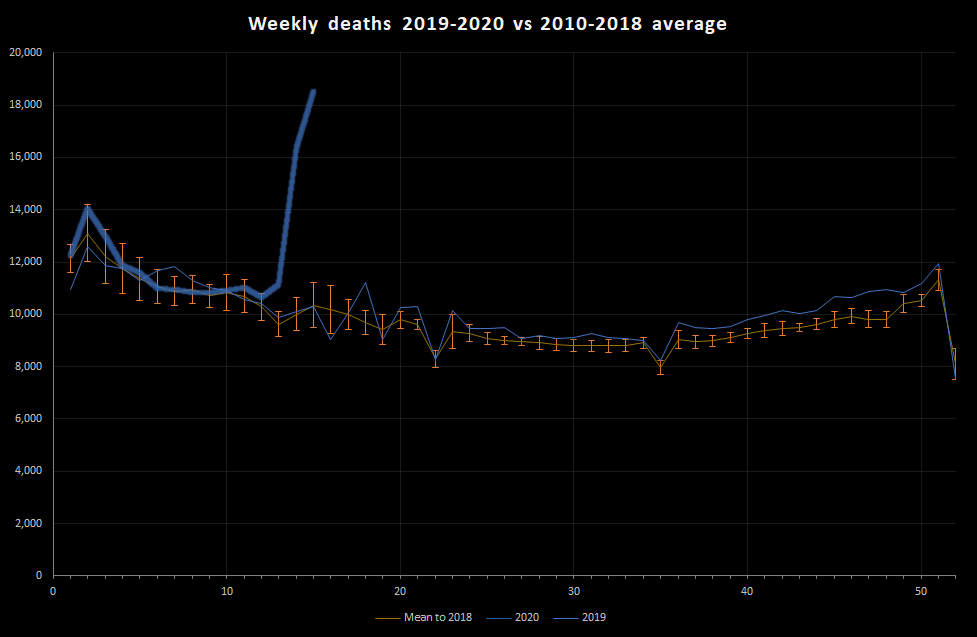 We can also subtract the average number of deaths to explain how many more deaths than usual there has been each week this year:

Yes, there’s the rather alarming recent peak, but there’s other relevant information in these graphs, particularly if we combine them with some necessary information about populations:

There’s more variation within a year than between years: Even in an average year, the weekly deaths are expected to vary between about 8,000 and 13,000 deaths per week in England and Wales.

Most people won’t notice the deaths immediately: This is one of the perverse observations about outbreaks. Most people do not experience the deaths until the outbreak is well underway. The population of England and Wales is about 59 million. That means that, with 19,000 more deaths than expected, 0.03% of the population has died. That means, as 10th April, we had had 1 extra death per 3,000 people (approximately – there’s a lot of rounding in that). That is a lot, but it is at a level where many people will know of someone who has died, but most people will not have been in regular contact with someone who has died. It’s as if we were experiencing 2 weeks’ worth of deaths each week.

The impact is much higher for some people than others: We all know that some groups are more vulnerable than others. Those who have family and friends who are very vulnerable will be feeling that vulnerability. If we look at the graph and the difference between a regular flu season and the current death rate, we see the societal impact. Our world is built to cope with a bad flu season because that is the most predictable cause of excess death. We are now in a situation where that capacity is being exceeded. This means that those dealing with health care, burials, etc, will be experiencing much higher demand than they are designed to handle. The logistics of death are cruel.

What can we do?

People globally are doing their best. There are going to be mistakes. Because of the way outbreaks and world economics operate, those mistakes will have horrific consequences that are not going to be evenly distributed in society. However, pretty much everything being done falls into 5 bucket

Different countries are balancing these in different ways. Be wary of over-excitable reporting, though. There have been several claims about some countries doing better than others. Reliable statistics are not always available and, where they are, they can show a more nuanced picture.

For example, there were initial reports that Sweden was doing fine without lockdown and there are now some concerns that it is failing. The mortality statistics for Sweden indicate that for every 1,000 expected deaths in the week to 3rd April, Sweden saw 1,213 deaths while England and Wales saw 1,158 deaths. These are within the margin of error of each other (i.e. we can’t distinguish between them). Sweden has a total population slightly above that of London, and the population is distributed around healthcare infrastructure in a different way to England and Wales. It is not surprising that their approaches differ. Without a very detailed analysis, it is incredibly difficult to guess what path either country should have taken. Sweden may have judged that it could handle a relatively larger peak to their mortality curve, or they may just be using different disease modelling assumptions.

The key message, then, is that this is bad from a health systems perspective and will be a terrible time for many people. However, you may find yourselves and the people you know and love relatively unaffected or more affected by financial and other concerns than by coronavirus. We hope that’s of some interest.