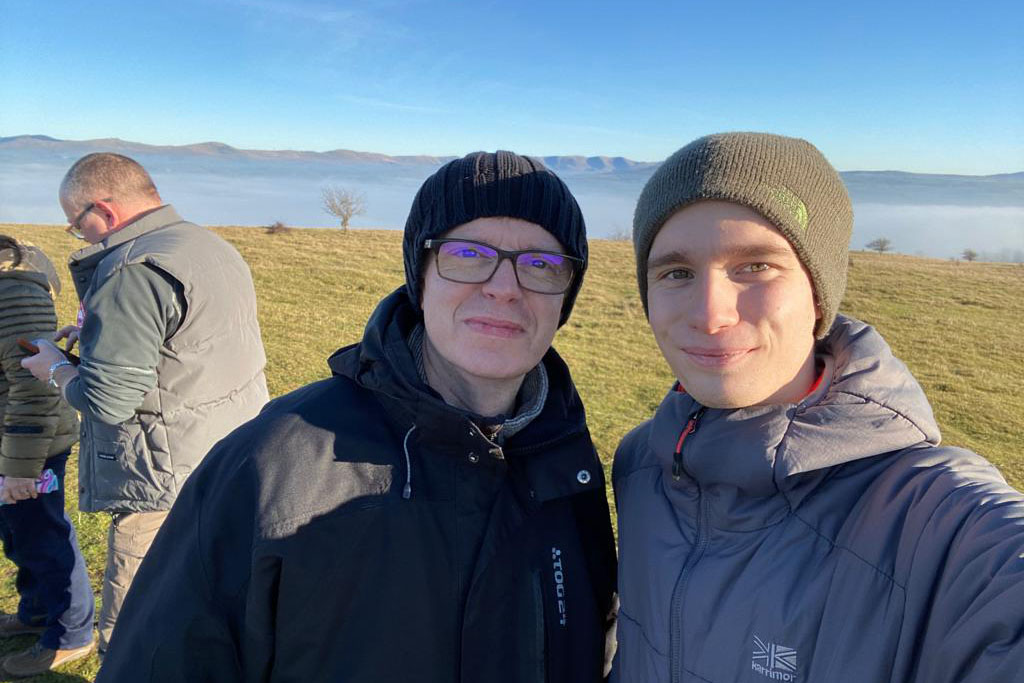 “I started feeling a bit below par in April this year with a persistent cough I couldn’t seem to shake off, but I did numerous covid tests which kept coming back negative”, says Alex Deverill, a food and nutrition student from Kendal in Cumbria, explaining when he first noticed something wasn’t quite right with his health.

“I’d been staying back at my parents’ house in Cumbria because of the pandemic, but by the time I was set to return to university in Sheffield in May I wasn’t feeling any better. I was still coughing, I’d developed night sweats which were getting progressively worse, and I’d also lost weight – which was noticeable as I wasn’t particularly massive to begin with.”

In a bid to get to the bottom of how he was feeling, Alex tried to make an appointment to see his doctor before going back to university, but because of covid they weren’t seeing anyone face-to-face. “The best they could offer me was a telephone appointment at the end of September, and my symptoms were getting steadily worse”, he says, “but I tried to just put it out of my mind until then and get on with things”.

Alex’s family, however, were getting increasingly concerned. “After he moved back to Sheffield we went to visit him at the end of June and were worried that he wasn’t any better, and was complaining of feeling really tired all the time”, says Alex’s dad Mark.

“In particular, his mum and I were concerned that some of his symptoms sounded similar to a friend who had been diagnosed with non-Hodgkin’s lymphoma at a young age, so we decided that the best way to move this forward was to pay for a private blood test to try to rule out any sinister causes.

“I did the usual thing of searching on the Internet and when I read up on Melio’s information I felt it was the best fit for what we were looking for, so I sent the information to Alex and left it up to him to take it forward.”

Alex decided to book in for Melio’s most comprehensive blood test to try to cover as many issues as possible, and he went to a branch of Superdrug just a few minutes away from where he lived to have the test carried out by a qualified phlebotomy clinician.

“It was really convenient for me as the test only took about 15-20 minutes, and then they sent it off for me”, says Alex. “The blood was taken on the Thursday and I started to get initial results back online by the Friday evening, which were all fine at first, but then on the Saturday morning I got a call from Dr Joel McCay, one of Melio’s haematology advisors, and things took a bit more of a worrying turn.

“Joel said he had an idea of what might be going on, as the main thing the blood results showed was a problem with my white blood cell count being way too high, and that I needed to get myself to the nearest A&E department as quickly as I could – with an explanatory letter he was going to send me to show them – to get it checked out further.”

As luck would have it, Alex was back at home in Kendal when the results came through, so his dad took him straight to Lancaster A&E. “It was a bit of a shock for all of us but we didn’t really have time to dwell on what it might be”, says Mark, “although I didn’t enjoy having to wait in the hospital car park as Alex went in by himself because of all the Covid restrictions”.

Expecting a bit of a wait in A&E, Alex found the letter he’d taken with him from Melio’s medical lead Dr Kush Joshi sped up the process and he was seen within half an hour. “It went a lot faster than I’d anticipated”, says Alex “and pretty soon they’d taken more blood and put me in a private room to set me up with a cannula in case they needed to give me antibiotics.

“At this point I was still thinking it probably wasn’t anything too serious, but then the A&E doctor came in and asked if anyone was with me. I said my dad was outside so he went to get him, and it was then that I pieced it together in my head that if there’s something wrong with my bloods it’s probably leukaemia, which is what it turned out to be.”

After sending Alex’s blood samples to a neighbouring hospital in Barrow for a second opinion the consultant broke the news Alex and his father that the diagnosis was indeed chronic myeloid leukaemia.

“Of course we had lots of questions, but the consultant was really good and explained what was happening, and what the full treatment path was going to be”, says Alex.

“They immediately started me on a chemotherapy tablet called hydroxycarbamide to get my white blood cell count down, and gave me two blood transfusions through the night to tackle my anaemia. By the Monday I was having a bone marrow biopsy, which wasn’t pleasant, and two days later the results of that come through, which showed that my illness was thankfully still in the very early stages.

“I ended up being in hospital for six days, which in the scheme of things it’s nothing compared to what I thought I was facing, and I was sent home to continue taking my treatment there as I didn’t need to be in hospital anymore.

“My latest blood tests show that my levels are completely normal so everything has gone back to where it should be. All my symptoms have gone, I don’t have a cough anymore, I have not had night sweats for a couple of months now, and I’ve got a lot more energy. I’m now on long-term treatment which suppresses the cancer cells, but as long as I keep taking it should stay just as well as anyone else.”

With hindsight, Alex admits he knew something wasn’t right for a while, but says: “Because I started to feel unwell slowly I didn’t really notice and my body seemed to compensate for it. My advice is if you can’t get to see a doctor and you know something isn’t right don’t just ignore it and hope it will go away because the chances are it probably won’t.

“We were lucky that we found out about Melio’s blood tests, because if we’d waited to talk to the GP I think I would definitely be in a very different situation to where I am now. Whatever you have, the earlier you discover it the easier it is to treat and the sooner things will go back to normal.”

And Mark agrees: “Being able to get some baseline information through a blood test and then a diagnosis in such a timely manner made all the difference, and at a time when it didn’t seem possible to access this kind of help through the usual medical channels, Melio helped us get the solution.”